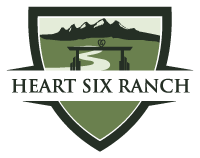 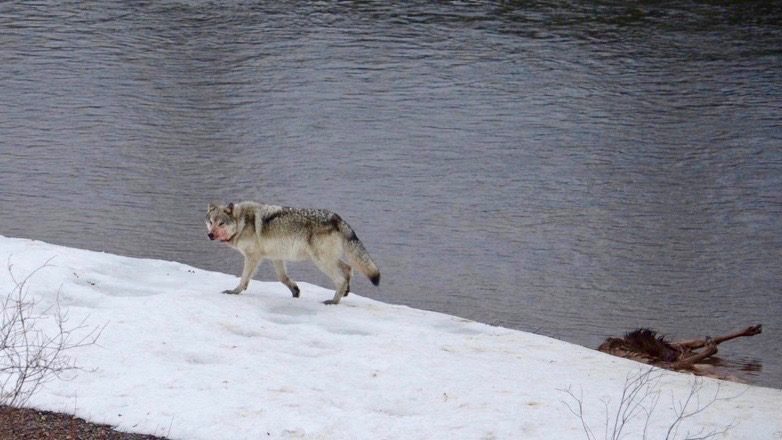 Wyoming Elk Hunting is a lot easier for a Wolf.

Terry, the front guest operations manager took this picture in the winter of 2017 of one of the wolves that was cast wyoming elk hunting right in front of the ranch.  If you look at our webcam link this is the bank of the river just to the left of the area on the camera.  The elk was in an area where we go fly fishing and the wolves killed it it only took around 72 hours for the wolves, coyotes, and birds to clean up the entire carcass.  We were all amazed at how nothing went to waste.

I have been out in the Bridger-Teton Wilderness on a Wyoming Elk hunt when I have come across wolves hunting elk.  I did not see the actual kill, but I was amazed at the sounds that Dave, another guide and I heard and the tracks we saw in the snow.  I was riding Winston that day and just like our encounter with the Grizzly Bear Winston was rock solid.  If you want to ride Winston, he is available during hunting season so long as you weigh less than 210lbs.  The wolf hunt sounded like it was coming from every direction and for a few moments in time that seemed to stretch forever Dave and I both thought that we might be the intended prey and we both reached for our guns.  I had a 44 Rutger Vaquero and Dave had a Glock 20.  The sound was so loud that I thought a jet airplane was crashing and the pieces were going to land all around us.  This did not sound like dogs, but more mechanical and out of this world.  It reminded me of the movie Alien with Sigourney Weaver.  We then heard the noises of an elk clearly under attack and then there was a silence, but not one of peace but rather death.  We saw the coyotes which had been off on the other side of a large alpine meadow at around 9000 feet move in the direction of the final noises and we decided to turn and leave the area.  The truth is Winston had cut his leg and we realized that a little blood was dripping in the snow and we were concerned that the wolves or a grizzly would soon begin to follow Winston and that we would not be able to protect him.  The wise choice now that we knew where the wolves were was to leave the area and head to safety.  I learned big game fishing off the coast of Boca Raton, Florida that when you see sharks in the water to pick up lines and head to another location to catch Mahi Mahi.  The same lesson applies to Wyoming Elk Hunting.  If the wolves are around, the Elk are smart enough to leave the area in a really big hurry!